Over the past ten years, Larry Moss and Jean-Louis Rodrigue have enjoyed a creative relationship, first focusing on the study of the Alexander Technique and actor training, and then as collaborators in Moss’s directorial assignments: Pamela Gien’s The Syringa Tree and then, Bo Eason’s Runt of the Litter.

Their relationship is deeply founded in their shared passion of developing the actor’s initiative, freedom, and sense of individual responsibility. Although the acquisition of strongly developed technique of body and voice is a basic aim, technique is never allowed to dominate. Rather the individual’s human quality, talent, and storytelling ability is encouraged to gradually develop and shine.

“The Syringa Tree” is currently on a national tour originating from Theaterworks, Inc. and produced by Matt Salinger. After two years of workshopping the play at the studio, it opened in Seattle at ACT to wide acclaim.

In September 2000, The Syringa Tree came to New York at Playhouse 91 where it has run to sold out performances and won the Obie Award for Best Play, Drama Desk and Outer Critics Awards for Best Performance.

In 2002, The Syringa Tree ran at the Royal National Theater and was broadcast on the Trio Network. 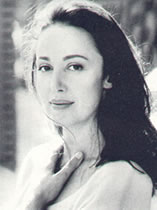 Pamela Gien’s tour de force performance traces the journey of a vibrant and curious 6-year-old girl as she confronts the confusing horrors of apartheid.

Gien portrays more than two-dozen characters, and the transformations required a high degree of physical and vocal flexibility and dexterity. Gien explains “One of the greatest gifts to my work was when Larry Moss enlisted the assistance of Jean-Louis Rodrigue in our preparation of “The Syringa Tree”. 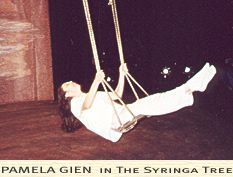 He greatly enhanced my performance physically and vocally, giving me an innate understanding of the deep resource of energy within my body. Spiritually he linked what I was working to accomplish, the creation of more than twenty characters in one body, to the vast scope of energy in the universe. He grounded me to the earth, and lifted my vision to a wider expanse.”

Be sure to check out the official site: www.syringatree.com 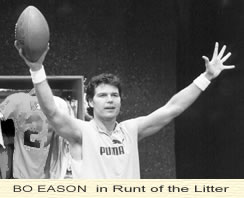 “Runt of the Litter” was also developed in the same way. Written and performed by ex-NFL football player Bo Eason, the one-man play tells the compelling story of Henry and his family in their drive to make him a professional football player.The play ran to critical acclaim at Stages Repertory in Houston and at the MCC Theater in New York. Again, Rodrigue was invited to work with Eason on the physical demands of his role.
Bo Easton in The Runt of the Litter

Eason is an incredibly disciplined actor and reveals that “As a professional athlete and now a performer on a different stage, I know the importance and the power of the body. The body is how we communicate twenty-four hour a day. Your words may lie, but the body always tells the truth. Jean-Louis has helped me uncover the truth in my body…and gives me the power and security and permission to express myself as an actor on a whole new level.”

Larry Moss describes the collaboration in terms of what the actor ultimately discovers about the work: “One of the most important things an actor can posses is a relationship to their own body and breath. Jean-Louis Rodrigue works with actors in such a way that they immediately understand from deep within themselves their true impulses.

Jean-Louis is more than a teacher, he is a spirit that enters the actor’s instrument and teaches them the truth of the character they are going to portray. His work is invaluable and I cannot imagine doing a project without him.”