Nine years old and going strong: The idea of the Berlinale Talent Campus has lost nothing of its freshness and international attraction. This is what Dieter Kosslick, artistic director of the Berlinale, said of his pet project, which is part of the annual Berlin International Film Festival. He invited three years ago Jean-Louis Rodrigue to participate as one of the Experts, to mentor the chosen 350 filmmakers attending the Campus. 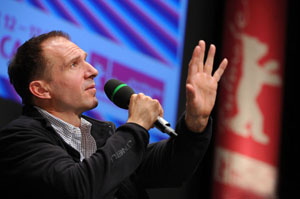 The Berlinale Talent Campus is an annual event that takes place parallel to the Berlin International Film Festival. The Campus and its participants benefit greatly from their proximity to the main festival centre and the European Film Market (EFM). The 350 young students or graduates from film schools and/ or film professionals early in their careers are invited to learn from top experts through lectures, seminars and workshops, and have the opportunity to build international networks. 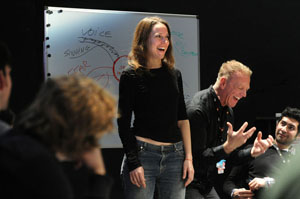 This year Jean-Louis taught two hands-on workshops; one workshop was called “Your Body Speaks: The Art of Presenting Your Film. This workshop focused on how the director and producer present their project to potential studio executives and investors, and learning effective ways of using physical awareness, confident body language, and engaging the imagination and emotions of their audience to successfully pitch their project. The other workshop was called “Embodying The Character” as part of Talent Actors Stage, assisting actors to enhance their technique and develop craft. One of the filmmakers participating in the “Your Body Speaks” workshop sent the following feedback: 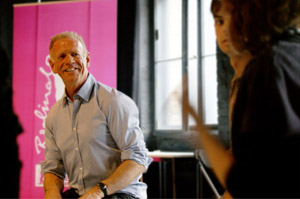 “What a fabulous seminar! Thank you so much! I pitched my accordion fairy tale script to you and the class, and that experience led to a plethora of wonderful encounters. Thanks to your workshop and the new relaxed confidence it instilled in me, I pitched the heck out of my project at EFM the next day, and got meetings with major producers from all over Europe! Most importantly, I felt much more courage in general — not only talking about my project but conceiving of myself as an artist whose work is worth talking about. Amazing how our bodies influence our minds.” 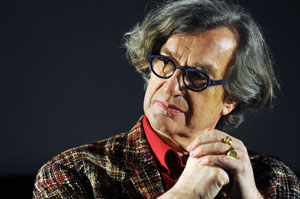 Jean-Louis was among 150 experts working in film who collaborated with filmmakers from around the world. Other experts included Isabella Rossellini who is also the President of the Jury of the festival, Harry Belafonte, Ralph Fiennes, Istvan Szabo, composer Michael Nyman, Paul Schrader, and Wim Wenders.