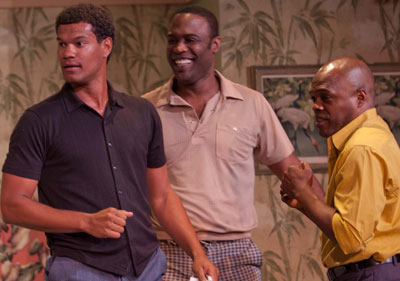 One Night in Miami is the world premiere of a play by Kent Powers opening June 8, 2013 at the Rogue Machine Theatre, and playing through July 28, 2013. The play chronicles the night following 22-year-old Cassius Clay’s heavyweight championship win on February 25, 1964. After the astonishing victory, Cassius and his three friends – Malcom X, singer Sam Cooke, and football player Jim Brown – found themselves in Malcom’s hotel room in Overtown, the black ghetto of Miami.  The next morning, Cassius would make yet another shocking announcement to the world, but an entire story of its own would take place before that occurred. “One Night in Miami … imagines what might have transpired on that very real, very fateful night in Malcolm’s motel room in 1964. The civil rights struggle was ready to boil over. And in less than a year, two of these friends would be dead. But on this night, the possibilities seemed endless” (Rogue Machine Theatre). 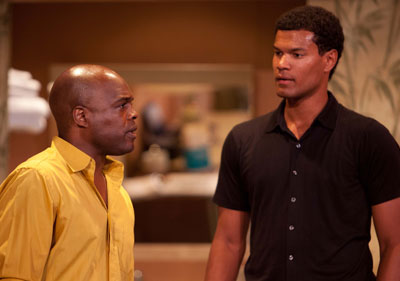 Ty Jones and Matt Jones in One Night in Miami

The play features an incredibly talented ensemble and stars Matt Jones, a longtime student of Jean-Louis Rodrigue’s since his days studying in the UCLA School of Theater, Film, and Television. Matt worked extensively with Jean-Louis to cultivate the physicality and energy of Muhammad Ali, who later became known for his high level of coordination, lightness, and specific boxing style. He had the ability to judge distance and control the space between an opponent. Ali could appear to be in range for his opponent to strike, but when the attack was executed he wasn’t there to be hit.  Muhammad Ali created a mental and physical illusion through his quick footwork; he was leaning but he was constantly moving, and using angles.

Regionally, Matt Jones has appeared three times with the AlterTheater Ensemble (Intimate Apparel, Two Sisters and a Piano, References to Salvador Dalí Make Me Hot), twice with the African-American Shakespeare Company (Twelfth Night, Cinderella), and once with TheatreWorks (in the world-premier production of Clementine in the Lower 9), for which he was nominated for a Bay Area Theatre Critics Circle Award. Mr. Jones is a recent recipient of the 2011-2012 Princess Grace Award in Theater, and can be seen as Orsino in the upcoming film adaptation of As You Like It.

To purchase tickets for One Night in Miami, visit: http://www.roguemachinetheatre.com/ or call the theater directly at (855) 585-5185.