Kristof teachers Embodying the Character in Film Intensive in Milan 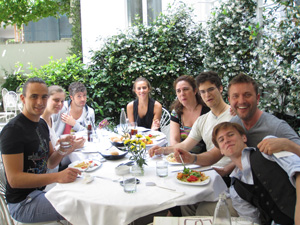 More than 75% of human communication happens through the body. In a three day intensive workshop of Embodying the Character in FILM, Kristof’s students where able to learn practical tools with which to create the characters for the film. Through the creative use of the principles of the Alexander Technique, the actors were taught the effective ways to tune up their instrument, so the natural, free and creative impulses had a chance to flow through their body. The ease and availability in actor’s craft comes from a deep understanding of the importance of the organization and the distribution of the effort. Too often we see the actors going through their laundry list of actions, intentions etc… all in their heads. 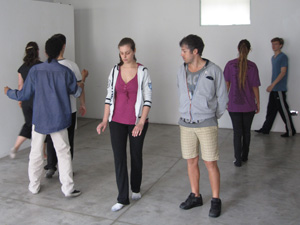 Believable acting in film is a result of actors being present in their bodies. The Italian actors were encouraged in the workshop to create the character’s lives in every cell of their bodies and not only in their heads. If the body is not at ease, there is very little chance for the actor to be able to actually listen to another character or to create a heightened state of awareness which facilitates the ability to be easily affected by environment, circumstances, people and things in the character’s life.

“With the best of intentions, the job of acting can become a display of accumulated bad habits, trapped instincts and blocked energies. Working with the Alexander Technique to untangle the wires has given me sightings of another way; mind and body, work and life together. Real imaginative freedom.”