The long awaited visit to Los Angeles by the Royal Shakespeare Company presenting “King Lear” and “The Seagull” was a huge success from October 20-27, 2007. Jean-Louis Rodrigue organized master classes in “Speaking Shakespeare” with Lyn Darnley (RSC Head of Voice and Artist Development) and Gemma Fairlie (RSC Assistant Director). Sponsored by UCLA Live, these workshops were designed for the MFA students at the UCLA Theater Department and also open to the L.A. theater community. 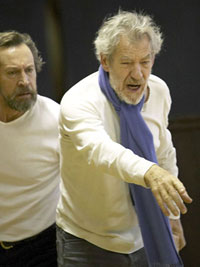 Additionally, the RSC had been traveling around the U.S., so the company members were tired and in need of a “tune-up.” Jean-Louis and Kristof came to the rescue and scheduled appointments for the actors interested in taking Alexander Technique lessons. Sir Ian McKellen was the first to sign up and took several lessons during the run of the play. The RSC makes use of the Alexander Technique in their on-going training of actors. Sir Ian stated:

I was very enthusiastic about the value of the Alexander Technique and I made it possible for all members of the “Richard III” and “The King Lear” companies to have lessons whilst rehearsing.