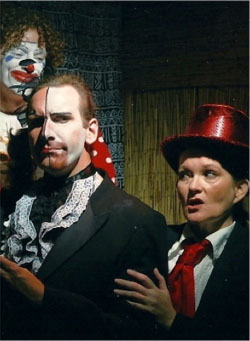 Ann Colby Stocking graduated from the MFA Acting Program at UCLA in 2000, where she studied the Alexander Technique with Jean-Louis Rodrigue. She has been a busy actress since her graduation, having starred in “The Body of Bourne” at the Mark Taper Forum and at the Kennedy Center in Washington, A Gretty Good Time at the Falcon Theatre, and most recently as Martha in Who’s Afraid of Virginia Wolf at the NoHo Arts Center. In Paradise Park, which performs at the City Garage, Charles L. Mee describes the play in the following way:

“Because the theatre is the art from that deals above all others in human relationships, then theatre is the art, par excellence, in which we discover what it is to be human and what is possible for humans to be.”

The Los Angeles Times review of the play claims:

“Ann Stocking’s ventriloquist is mesmerizing, no mean feat given that David E. Frank turns his bipolar dummies into a tour de force.”
www.citygarage.org