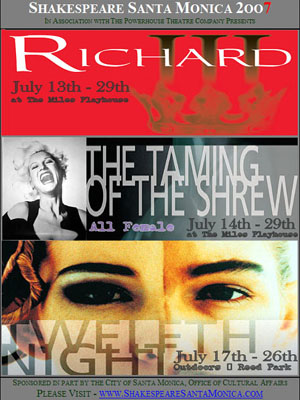 In 2006, John Farmanesh-Bocca, the artistic director of Shakespeare Santa Monica, invited Jean-Louis Rodrigue to teach the two-week intensive classical acting program which is associated with the repertory of plays by Shakespeare. Once again, this summer Jean-Louis joins the faculty which includes: Voice and Speech with Natsuko Ohama, Master teacher of the Linkletter voice technique, Currently Head of Voice at the USC Graduate Acting Program. Natsuko has worked with Peter Brook’s Acting Company and is a Co-Founder of the famed Shakespeare and Co. in Upstate New York. Alexander Technique with Jean-Louis Rodrigue, master teacher of the Alexander Technique at UCLA Grad Acting, and a highly regarded celebrity coach. Acting and Text with Louis Scheeder. Chair of the Classical Studio of New York University’s Tisch School of the Arts (TSOA), and currently the Associate Dean of Faculty. Author of the book, ’All the Words on Stage,’ a complete pronunciation dictionary for all of Shakespeare’s plays. Physical Approach & Ensemble Building with John Farmanesh-Bocca, Directing Fellow at the Juillard School (03′-05’) and faculty at the Classical Studio at New York University’s TSOA.