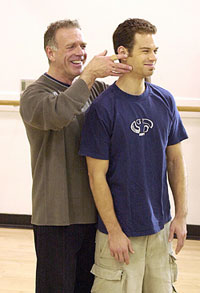 In a tiny dance studio in East Melnitz Hall, 13 students sat in a circle, eyes closed, caressing different objects: a candle, a piece of ribbon, a cracker, a Slinky.

Jean-Louis Rodrigue, visiting assistant professor of acting, observed them closely. “Explore the shape, the weight, the texture,” he encouraged. “What does that do to the relationship between you and the object?”

The students, all enrolled in Rodrigue’s Alexander Technique 425B course in the M.F.A. acting program, rubbed the objects against their skin, tasted them, tossed them into the air.

“When I squeezed it, I felt as if I were at the beach because it sounded like sand,” one student commented about the small beanbag he held. “I could feel the ocean breeze.”

“That’s the power of contact,” Rodrigue said. “It’s important to use an object to release tension when you’re on stage. If you’re tense, touch something, even if it’s you.”

The Alexander Technique is a method that integrates the body and mind in action. Named after F.M. Alexander, an Australian actor who developed it in the early 1900s, the technique helps improve everyday activities as well as more complex, skilled actions such as singing or acting.

“Alexander teaches you how to be more aware of yourself and how to prevent doing things that are destructive,” Rodrigue explained. “For instance, you learn that the primary control is the relationship of the head to the spine. This helps to develop presence, which is fundamental in acting.”

Rodrigue’s expertise has placed him in demand in Hollywood, where he has coached major directors, producers and actors including, most recently, Hilary Swank who portrayed an aristocrat in the period film, “The Affair of the Necklace.”

Acting, not teaching, was Rodrigue’s original goal. Born in Morocco and raised in Milan, he moved with his family to New York in 1966, where he attended the American Musical and Dramatic Academy and later studied with renowned acting teacher Herbert Berghof.

In 1970, Rodrigue received a scholarship to the American Conservatory Theater in San Francisco, where he first learned about the Alexander Technique.

“Everybody in the theater studied it, even stagehands and directors,” Rodrigue said. “I became fascinated with movement and awareness of the body.”

Subsequently, Rodrigue trained to be an Alexander teacher. He introduced it to musicians in the San Francisco Symphony and the Los Angeles Philharmonic before joining UCLA in 1988. Most recently, he’s been working with former professional football player Bo Eason, who will star in an off-Broadway production, “Runt of the Litter,” later this month.

But Rodrigue has no intention of leaving UCLA. “If you have to teach someone else what you know, it requires a clear idea of who you are,” he said. “Education sharpens your chops, keeps you awake. It’s exciting!”