Actress and writer Lynn Redgrave, one of the founding members of Britain’s National Theatre, studied the Alexander Technique at the beginning of her stage, screen and television career. A veteran of Broadway and London’s West End where she has appeared in classic and contemporary works, she garnered the 1994 Outer Critics Circle Award and a nomination for a 1993 Tony award for her solo performance of “Shakespeare for My Father.” Her film work includes “Georgy Girl” for which she received an Oscar nomination. She recently appeared with her sister, Vanessa Redgrave, in the title role of ABC-TV’s remake of “Whatever Happened to Baby Jane?” Here other television work includes the series “House Calls” and the Masterpiece Theatre mini-series “Calling the Shots.” Most recently, Ms. Redgrave was nominated for Oscar for her performance in “God’s and Monsters.” 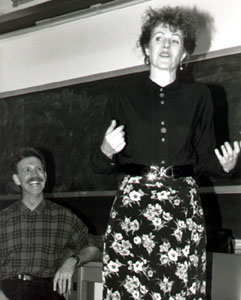 Why did you Study the Alexander Technique?
I was born with no natural aptitude. I wasn’t pretty. I moved with no grace at all. I auditioned for the London Academy of Musical and Dramatic Arts but was not accepted. When I was finally admitted to Central School of Speech and Drama and showed up at my first movement class with my hump back and wearing a leotard, the movement teacher said, “Oh God.” He sent me to the head of the school who then sent me to study the Alexander Technique with Dr. Wilfred Barlow. That whole semester I took Alexander lessons instead of attending movement classes which helped me enormously in my training and in subsequent years in my acting work. Now I can play people who are graceful and beautiful.

What do you feel most of today’s actors are lacking?
Voice, energy, breath – the ability to share their performance with the audience.

What are the fundamental qualities needed by the actor today?
Stamina, good humor, health, physical fitness, voice and the Alexander Technique.

How would you compare American and British Actors?
Essentially the difference is their general attitude. American actors have a better sense that “if it’s not me it will be someone else and I’ll miss my chance.” Generally, Americans are more serious actors and are more likely to think of acting as a lifetime job. The English are more likely to think, “I’ve got it now.” The English love an amateur, while Americans love a professional.

Any upcoming films?
An Australian film, “Shine,” in which I appear with John Gielgud will be out in the spring.

Any future plans for “Shakespeare for My Father” or other theater projects?
I am deciding when to take “Shakespeare for my Father” to England and I am writing a play which has an extremely good role for me in it.