Jogging doesn’t have to be a pain

Written by Peta Bee, this article first appeared in The Daily Telegraph (June 27, 2000). 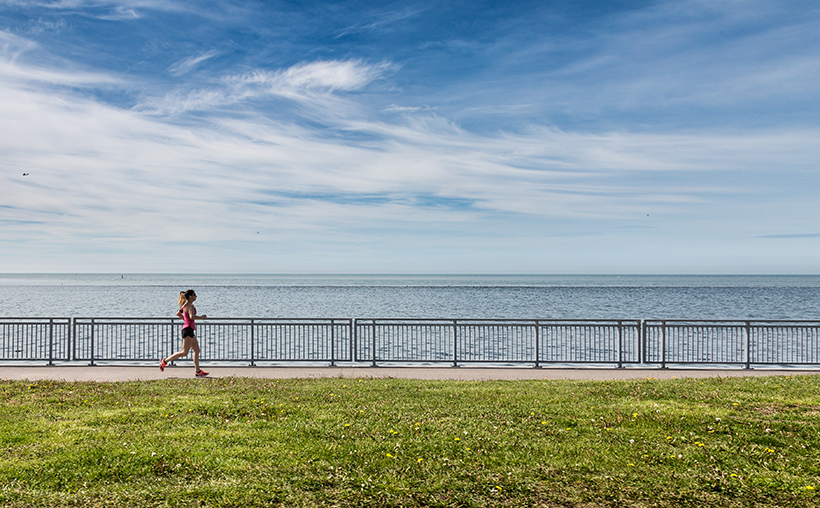 Running is back in fashion and while this is welcome news for our waistlines, it bodes less well for our hips and knees. A decade of pounding the pavements during the jogging boom of the Eighties left many fitness enthusiasts injured and forced to switch to less strenuous activities.

Most people who take up running never learn to do it well. The Alexander Technique can help people move and breathe more easily.

However, the sport’s image as the enemy of vulnerable joints is being challenged by the authors of a new book, The Art of Running. According to co-authors Andrew Shields and Malcolm Balk, it is not so much as jogging itself that is usually to blame for niggles, pain and strains.

Just watch the London Marathon on television or take a look at runners passing you in the street, says Shields, and you will witness the most particular technical adjustments to what is, basically, a natural form of movement.

“It is sad but true, that most people who take up running never learn to do it well. They run with knock-knees, rounded shoulders, bobbing heads, flapping hands or even leaning to one side.” he says. “Sometimes they are grunting, or running flat-footed with such force that you hear them well before you see them.”

As a high-impact activity, running is not without its risks. Each time a jogger’s foot strikes the ground, a shock equivalent to three times their body weight reverberates from the feet and legs and up through the spine. A well-cushioned pair of trainers helps to lessen the blow, but even the most expensive shoes will not make up for inadequacies in running style.

“If your body is off-balance when you run, you are asking for problems,” says Sheilds. “Very often, pain in one part of the body is simply a sign that you are doing something wrong elsewhere. For instance, a strained calf muscle could be traced back to the fact that you hold your head to one side. That might cause tension in your back muscles, which forces you to compensate by adjusting the length of your stride.”

A keen runner and nationally ranked triple jumper in his youth, Sheilds was plagued with recurrent injuries until he discovered the Alexander Technique – the popular method of postural awareness that teaches people to become more in tune with the way their body moves. A chance meeting with Malcolm Balk, an Alexander instructor from Canada who applies the principles to coaching runners, confirmed Sheild’s suspicion that the two disciplines would combine perfectly. Now the pare hope to revolutionize the way people run by teaching them how to undo the bad habits they have been practicing for years.

Crucial to the Alexander Technique is learning how to loosen the neck so that the head extends gently forward. This promotes a natural lengthening of the spine, which releases muscles and joints so that body alignment is improved. For runners, it translates into freer movement of the limbs and an ability to breathe more easily under pressure.

“The head weighs about 10 pounds so it doesn’t take a rocket scientist to figure out that letting it roll around is going to place tremendous loan on the rest of the body,” says Sheilds. “It creates tension in the shoulders and puts immense pressure on the spine. Similarly, running with your head backwards compresses the vertebrae in the neck causing the back to arch and stiffen.”

Another common mistake is to clench the teeth or grimace when the going gets tough. Smiling, says Balk is infinitely preferable. “Runners do some pretty awful things with their faces when they run,” he says. “Facial grimaces do little to help you get from A to B. Rather, they are an indication they your energy is being misdirected instead of going where it will do most good.” Shields also advises learning to run quietly rather than pounding the tarmac and to avoid springing too high. “Research has shown that elite runners have less vertical change in their centers of mass compared with average runners,” he says. “If you stop bouncing up and down you will reduce the quantity of vertical movement and proceed at the same pace with less effort.”

However, it is not only those who run for fun who are technically inefficient. Sheilds often winces at the simple mechanical errors made by top athletes when he watches television coverage of the international track and field meetings.

“Even in Olympic races it is not unusual to see a runner who is in the lead panic and become tense. His shoulders hunch so his arms can’t move as freely and is breathing is affected,” he says. “Inevitably when this happens he is beaten by the man who maintains good style through the line. It has happened countless times.”

While a few bodily adjustments could mean the difference between winning and losing at an elite level, for those of us who are content to plod through life at a more sedate pace, they can transform a daily run from an unforgiving slog into an enjoyable ritual. Poor technique not only leaves runners prone to injury, it often means they don’t enjoy what they are doing.

“Part of the problem is that people put too much focus on running fast,” says Sheilds. “They put their head down and grimly try to record a faster time on their stopwatch. Nine times out of 10 people who take this approach finds it ends up becoming a chore. Boredom and blindness set in as they put on their trainers and they wish they were somewhere else doing something more exciting. ”

This approach, I confess – as Sheilds and I trot through Regent’s Park in London – is my big downfall. I have run for 20 years but all too often the tyranny of the stopwatch scuppers my enjoyment. Shields suggests that removing the pressure of time constraints will be like lifting a weight from my shoulders.

Others could benefit from scrapping their self-imposed rules of running. Listening to music on a headset is the ultimate sin committed by joggers, says Sheilds, because it means they aren’t “tuned in” to their surroundings. But that aside, there are few restrictions you should place on your regular run in the park. Even slowing down to a walk when you are tired should not leave you racked with guilt.

“When running becomes just a means to an end – be it fitness, fame or fat reduction – it loses the features that elevate it from just another mundane activity,” says Shields. “Children run in an uninhibited way and we could learn a lot from them. They have yet to pick up on the mistakes we make as adults and, above all, they run purely because it is fun.”

How to be a better runner

Malcolm Balk is a qualified Alexander Technique teacher, specializing in working with runners of all standards, and a Level 4 track coach in Montreal, Canada. Email: balkm@videotron.ca

Andrew Shields is Sport and Fitness Editor of Time Out magazine in London. He has twice been runner-up in the British Sports Journalism Awards. Email: andrewshields@ukgateway.net