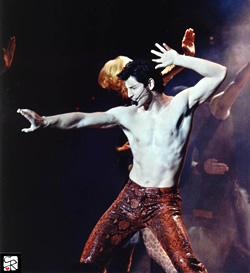 Sakis Rouvas, born on the Greek island of Corfu, will co-host the 2006 edition of the Eurovision Song Contest live from Athens. Sakis will co-host both the semi-final on May 18th and the grand finale on May 20th, 2006.

The popular singer has been studying acting with Howard Fine and the Alexander Technique with Jean-Louis Rodrigue and Kristof Konrad.

Highly physical in his performance, Sakis has been enjoying learning and integrating the Alexander Technique to his singing and athletic events. He is also a talented gymnast and has been pole vaulting for the Hellenic National Team.